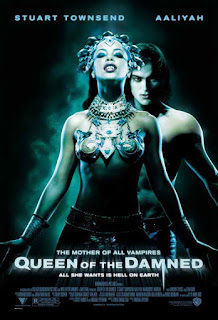 Oh man, get ready for about a billion RIPs in this review because there's a lot here that I'm going to mention that lists people that are either dead or dead inside.

Queen of the Damned is loosely based on parts of Anne Rice's Vampire Chronicles.  We get the vampire Lestat's origin story all mixed with him rising from a tomb to join a terrible nu-metal band.  Originally I thought it sounded like shitty Type-O Negative (RIP Peter Steele) with bad Layne Staley (RIP) or Scott Weiland (RIP) vocals.  Then I looked it up and all of the songs were co-written and performed by Jonathan Davis of Korn.  The soundtrack though had to have other nu-metal singers (RIP Chester Bennington. Yes, he did one of the songs here).

Lestat begins revealing vampire secrets in his songs and brings the existence of vampires the world.  His music ends up awakening Akasha (RIP Aaliyah), the Queen of the Damned.  She is essentially a vampire goddess.  Zany vampire hijinks ensue.

I'm not gonna lie and say that this film is good.  The acting is mostly crap except for Aaliyah.  There are good elements here but it feels like the script doesn't do any sort of justice to the source material (although, from what I've read, Interview... was pretty off the mark in some things).  Costuming looks more like some weird LARPing thing. The music in this film dates it pretty hard as well.  If it were just regular goth or goth/industrial then it might pass better but the nu-metal is rough to get through.  I'm not 16 anymore, it's not my jam.  In truth though, this movie does fall under that category of being so bad it's actually good.

I give Queen of the Damned 2 ears of corn out of 5: