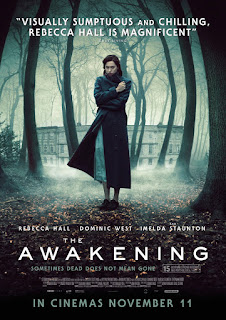 Sumptuous is a good word, but it doesn't sound appealing.  It hits the ear how some people cringe at the word "moist."  I think this is what might separate myself from the person that gave the quote that ended up on the poster.  Saying "it didn't make me want to smash my dick with a hammer" just doesn't have the same wide appeal when appearing in such print.

Our main character in The Awakening is a woman that works to debunk paranormal experiences in the early 1900's.  We're introduced to her as she metaphorically pulls back the curtain on a sham seance and exposes their charade piece by piece.  Shortly after this experience she is asked to come to an all boys school to help with the possibility of a ghost existing in the large mansion-turned-school.

This film reminded me a lot of the Del Toro produced movie The Orphanage.  They contain common threads as far as concept and presentation are concerned.  You could establish small connections with a majority of the characters as each one had legitimate depth.  The acting is solid and visually the film does a great job of making you feel as though you're in a haunted space in 1900's Britain.  This is more of a light horror film.  It consists of a few jump scares, but mostly a pending dread or suspense felt by the viewer.

I give The Awakening 3 Union Jacks out of 5: