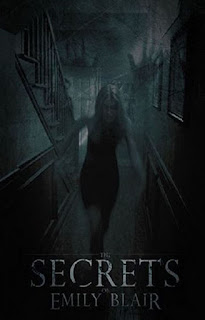 The moment this movie hit the opening credits my stomach cramped up.  It was as if to say that something deep inside me would rather take a terrible and painful deuce rather than subject my active mind to this dumpster fire.  I feel like the meeting to name this film went something like this:

"You know what made a bunch of money?"
"The Exorcism of Emily Rose?"
"What? No!  The Blair Witch Project."
"What about that book The Secret?"
"Oh shit!  The Secrets of Emily Blair!"
"Nailed it!  Now to kill you and collect all the money for myself!"

Here's the plot of this film.  Emily makes out with a homeless man and becomes possessed by a demon that turns her into a rude mother fucker.  Eventually she kills people, but mostly she's just a big B.  During Emily's possession times her spirit is trapped in a Stevie Nicks video with some sort of Dark Souls character.  When the demon finally does take total control of her she just turns into the singer Christeene.  Here is a side-by-side for comparison:

Twenty-seven minutes into this movie I assumed it was almost over and checked the time.  This movie was a fucking slog through a swamp.   There's nothing redeemable here.  Even the spooky possession power stuff couldn't bring me around to this.  She does stab a defrocked priest in the head with an ornate cross and that was kind of cool but by the time it happened I had tuned out too much to care.

I give The Secrets of Emily Blair copies of The Secret 0 out of 5: