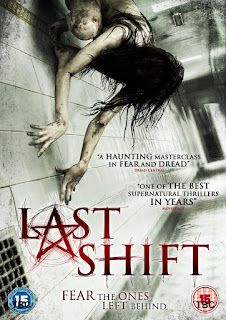 Last Shift is set in an old police station where Officer Laren is starting her first shift.  All she has to do is watch the building and at some point a clean-up crew is coming through to get some stuff from the evidence room.  What starts where her hearing some strange noises turns into a full-fledged haunting from the spirits of cult members.

I really got into this film.  It reminded me a lot of the Silent Hill video games because there were seemingly two worlds. Officer Laren would blink or turn away and her surroundings would change in that moment.  It made me feel like when you see something out of the corner of your eye, but turn and it's gone.  Last Shift also had some of the most frightening foley I've heard this side of J-Horror.  I haven't cringed from a horror movie in a while but this one made my shoulders tighten up.

My only complaint is that this film was done in 2014 and Officer Laren still had a flip phone.  Honestly, get with the fucking times girl!  No wonder ghosts are calling you, that's like have a Victrola strapped to your hip for your music!

I give Last Shift 3 police shields out of 5: