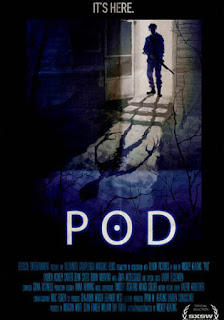 Hey.  We haven't sat down in a while and talked about a good tin-foil hat style movie.  What happened to those kind of films?  I feel as though that plot has just vanished from existence recently.  Maybe it was the government getting too worried about us getting close to flat earth lizard people working for the Illuminati and running the world's governments while the Greys prepare to enslave humanity!  Did I miss anything there?

Pod revolves around a set of three siblings.  After receiving a strange message from one of the brothers, the remaining two siblings fear for the brother's mental stability and drive out to check on him.  What they find is a crazed man talking about being experimented on while he was in the service and that he has captured one of the "things from the pod," which is locked in his basement.  Is this man losing his grip on reality?  What's in the basement?  How did he fire off a bunch of shots from a bolt action rifle without using the bolt? *cue X-Files theme*

I have two complaints which I'm going to throw here first because they're brief.  First is the initial dialog between one brother and the sister where he informs her about the message. This is the most uncoordinated five to ten minutes of script of the film.  It felt bumbling in the way a play goes awkward when an actor forgets the order of their lines and the scene is a mismatch of dialog.  It could've been much shorter and to the point as opposed to this drawn out hostility.  Second, I'm not entirely sure what the point was meant to be in regards to certain character development points.  Why was the sister drinking so much?  Was the scene with the guy she just slept with leaving and her drinking to show that she's not as straight laced as the one brother?  If so, why is she such an emotionally lose cannon in the film?

Those few things aside, after that awkward scene, I really liked Pod.  While I could tell where things were going to go most of the time, it would occasionally swerve into the other direction just enough to leave you a bit freaked out.  The creature looked great when we get the reveal and was this great mix of alien/cryptid/undead design.  The acting from the military brother and the sister were fucking stellar.  The brother's manic behavior and later the sister's breakdown and crying actually resonated with me.  What can I say?  I was entertained... except for about five minutes where I got distracted on my laptop with the Ryan Gosling not eating his cereal video, but that's entertainment in itself.

I give Pod 3 Dana Scully rolling her eyes out of 5: