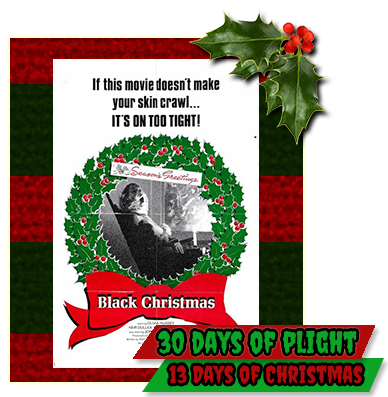 I figured we could start the 13 Days of Christmas with a true holiday classic.  So light up the tree, spike your egg nog extra strong, and make sure your lawn is booby trapped to keep those damn carolers away.  Let's get into Black Christmas.

One of the innovators of the slasher genre, Black Christmas is the ultimate "the call is coming from inside the house" film.  A sorority house has been receiving obscene phone calls from a man that switches between weird baby noises and violent sexual comments, sometimes doing two voices at once which is a real fucking talent.  After the house lush, Barb, tells the caller off, the sisters seem to settle into getting ready for everyone to leave for Christmas break.  While packing, Clare hears the house cat making strange noises at something in her closet.  Rather than getting help, or even a weapon, she just keeps saying "who's there" while going to check out the closet.  Her murder by dry cleaning bag is what sets off the chain of events that make up this movie.  Her corpse is also the poster art, complete with plastic wrapped head.

I first became aware of this film when the loose remake of 2006 was being made.  People lost their shit over the remake being released on Christmas, as if it was spitting in the eye of god.  The original has a much better plot structure though in the sense that it doesn't attempt to explain who the murderer is, how they got there, or why they're doing this.  I think that for an effective slasher you don't always need a set motive or backstory aside from "Oh shit, that person is going to wreck everyone."

I will say that this film is entirely dated and displays some of the most inept authority figures ever.  From the front desk cop that can't be bothered to do his job properly, to the sorority mother that has more hidden booze than a 20's-era speakeasy, to the cops that don't check the attic to find a three-day-old rotting corpse and psycho killer, everything is a mess.  We do get some interesting kills thanks to things like large crystal unicorn decorations.  Also, I have to bring up Barb again because she spends most of the movie being some sort of strange booze magician with her pulling cans of beer out of everything and then making guests feel uncomfortable while she talks about wanting to get fucked for three days like a turtle does.  She's the kind of girl that you go to a party with friends and somehow get stuck on a couch with her while she babbles about everything until she cries about something and you're stuck watching the car crash in slow motion.

I give Black Christmas 3 ripped Santas out of 5: