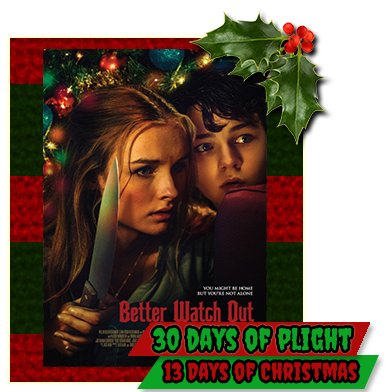 I watched Better Watch Out with my husband and by the end of it the household consensus was "fuck this film."  Then, later that night, there were a lot of other horror people in my Twitter feed talking about how much they liked it.  So this made me revisit my initial write-off of this film.  Was there something I missed?  Was there something they missed?  What lead to such a difference in opinion?  So I took some more time to really sit back and think about this film and have a discussion with my significant other to figure out what the deal is.  So let's get into it.

Better Watch Out is about Ashley being home for the holidays and agreeing to babysit Luke.  Never mind that Luke is 12 and probably doesn't need a baby sitter, or the fact that he wants to seduce Ashley, because that's not creepy.  After what seems like a home invasion, Ashley uncovers Luke and his friend's plan to scare her and make Luke seem like a hero because "white males."  When she goes to call Luke's parents he slaps her so she falls down the stairs and then the film takes its turn.

I'm honestly still up in the air with this film.  There are a lot of really small holes in it that are easy to miss but when you start to unravel the sweater you're just left with a pile of loose threads.  I suspected a heel turn a little bit before it happened, mainly because Luke appeared to have issues with the concept of "consent" with how he was trying to hit on Ashley early on.  On top of that, he didn't look 12.  This isn't a slight against the actor whom I think did a great job in his role, he just didn't add to the fact that this adolescent had a babysitter.  We also don't get any motivation for why Luke has his initial plan, or why he takes things so far, aside from he is a sociopath and seems to feel entitled to Ashley.  I can write a million paragraphs about why this is a problematic view, but to avoid turning this into a socio-political rant I will make the following statement:

In regards to horror, one of the most successful things a film can do is scare us by making the horror relatable.

Did Better Watch Out do that for me?  Yes, it did.  It did so for all of the wrong reasons.  While part of me wants to call this some adolescent jerk-off fantasy pushed too far, this has a believable component up to a certain point and that made me uncomfortable.  So as a horror film, it did what it set out to do.  It might not be on its terms, but, well, mission accomplished I guess.

I give Better Watch Out 2.5 ripped Santas out of 5: