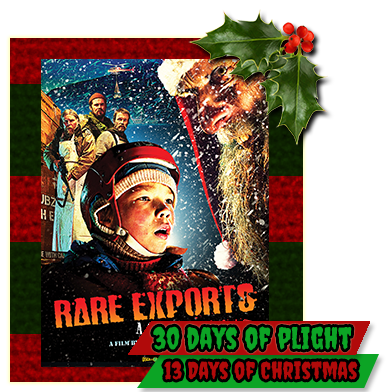 I don't really dig the Coca-Cola created Santa Claus.  I also don't really dig Christmas, so maybe it all gets lumped in together.  I do dig the concept of an evil Santa (and I'm not talking about another fucking Krampus movie!!).  I also listen to a lot of metal, including a decent cropping of black metal.  So how do all of these things come together?  Well, that's where Rare Exports: A Christmas Tale comes in.

Set in Finland (and mostly in Finnish), an eccentric old man has an excavation team digging up something frozen deep inside a mountain.  When the local reindeer farmers lose their herd to an unknown creature, and a naked old man ends up in one of their wolf traps, they scramble to make sense of what's going on while only a single child has everything figured out.

Rare Exports is metal as fuck!  Being set in Finland and in Finnish helps but there are some awesome illustrations of Santa sitting on thrones of skulls and punishing children.  The only actual visuals of Santa we get is him encased in ice but it looks like it should be the cover of a Iced Earth or maybe Amon Amarth album.  Also, an army of naked old men carrying pick axes in the middle of Finland's winter is kind of a frightening thought.

There is really only one reservation I have with this movie.  It felt a little slow but not enough that it drags you.  After a half-hour I thought I was much further into the film than I was, but that was the only point when I checked the clock.  Actually, the other reservation I have is that the kid runs outside in a sweater, some fucking Ugg looking boots, and just briefs on.  You might be used to the cold but no one is that used to it, especially a male.  Trust me, the cold does things... horrible things.

I give Rare Exports 4 ripped Santas out of 5: