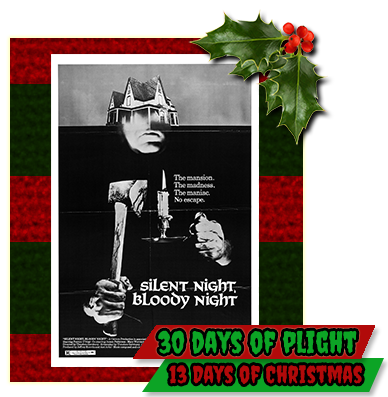 We start and end our journey with Diane attempting to tell us the bleak story of what happened and how she survived.  It's hammy and overdone but it's what we have to work with.  On Christmas Eve 20 years prior Wilfred Butler ran out of his house on fire.  Rather than rolling in the snow (which would make a lot of sense) he basically ran until he burned to death.  I got stop drop and roll shoved down my throat as a kid, but I was also a kid in the 80's when things like Mr. Yuck stickers were common but so was going into the woods at 9am and not coming back until it was almost nightfall.  In Butler's will he requested that his property would be taken over by a family member but that no one lives there for 20 years or else something garbled when being told would happen.  Time passes, someone escapes a mental hospital, and the strangest gathering of town elders get foreboding phone calls.  Then a journal is found, at night, by a sheriff wearing sunglasses (let that sink in for a second) and later re-found and that's how we learn the true story of Wilfred Butler.

I did an inflation calculator to find out what this movie's budget would be by today's standards and it would've been made now for $1.71 million dollars.  I figured this movie was made for a hot dog dinner and a case of Coke.  What the hell did that money go toward?

This film tried way too hard to make each character unique.  There's the woman with a million bird cages in her house, the old man that speaks primarily by just ringing a desk bell, and the lawyer's girlfriend that seems as though she's so foreign that she's from another planet.  I actually spent more time playing Broforce on my laptop than paying attention to this movie because it was a messy slog.  By the time we get the explanation from the journal on everything that's going on it comes out as this deluge of information that's too much too fuckin' late.

I could've gone on never knowing this film existed, but now that I do I feel as if just watching that made some sort of horcrux and it stole a piece of my soul.  I can never die now because I watched this movie.  It's a hellish existence.

I give Silent Night, Bloody Night 0 ripped Santas out of 5: