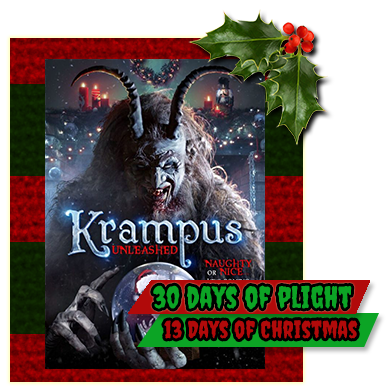 At some point in the last decade the U.S. caught a whiff of the Germanic folktale of Krampus and lost its collective mind.  A creature to rival Santa which kidnaps and beats and/or devours bad children?  Sign us the fuck up!  Kids are jerks!  Unfortunately, like most things we lose our minds over, people start cashing in on it.  With the release of the 2015 film Krampus making $61.8 million in box office alone then why wouldn't knock-off versions begin to pop up?  This is how I found Krampus Unleashed.

Following absolutely nothing in regards to the Krampus lore (aside from his look and setting the film during Christmas) we get some backstory about a bandit named Klaus that supposedly hid some treasure in the desert in Arizona.  A group of treasure hunters find the buried loot but it just ends up being some dirty socks and a large black stone.  This stone summons Krampus and he kills with wreckless abandon until the stone falls into a creek.  Fast forward years later and the stone is found by a boy that is part of a family get together on some land in the desert.  Krampus is summoned and this movie continues its sickening spiral into hell.

I don't know what I expected with this film, but I'm damn sure it isn't what I watched.  The acting was competent.  That's all.  The director got a bunch of people in front of a camera and they said their lines, but a lot of the emotional response or just physical acting lacked any talent.  When you tell a boy that his dad and grandfather were just murdered by a monster, and you do a close-up shot of the kid's face, you better make sure he looks upset.  Instead we get the "did I leave the stove on" face.  This movie had a plot, and it worked, but in that sense that if you put enough glue on things then they have to stick together.  Right?

The only redeeming moments of this film are each of the kills done by Krampus.  I thought Troma did some low budget stuff, but damn!  The blood was the reddest blood I have ever seen and every time a limb or head was severed it was apparent that some poor mannequin was getting fucked up.  The thing is, I can't fault them on it.  Even though it looked cheap it made me laugh every time.  It wasn't what they intended but at least I got enjoyment out of it.  If you look up anything from this movie then please look up Krampus punching the grandmother's head off.  That might be all you need to see.

I give Krampus Unleashed 1 ripped Santa out of 5: