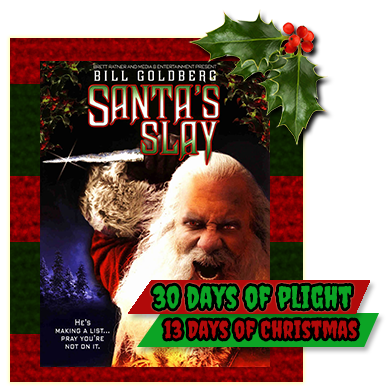 Holy sweet goddamn did I luck out with this one!  I had no previous knowledge of this film aside from the title alone but look right above that!  Bill fucking Goldberg!  WCW/WWE wrestler Bill fucking Goldberg gets top billing in this film.  Do you know why?  He's Santa in this!  I honestly don't know why I'm even writing this and not rushing to buy every last copy of this from the $5 bin at Wal-Mart to stuff each copy into my husband's stocking.  He doesn't care about wrestling but I can't justify buying those all for me, but if I say it's a gift for him...

Santa's Slay has a simple premise: Santa is actually the spawn of Satan.  One-thousand years ago an angel challenged Santa to a curling (the ice sport, not weightlifting) competition and won.  In return Santa had to stop being a dick and instead only commit good deeds for a thousand years.  Now that the deal has been fulfilled Santa goes on a murder spree with his buffalo reindeer drawn viking slay.  Can some lame teenagers stop him?  I don't care so long as Bill Goldberg keeps delivering one liners and killing people!

This film knows exactly what it is and turns that awareness into its greatest strength.  When carolers are out in the day the main characters question why, but it's a setup for Santa to wreck some carolers.  We know that, and the film knows that, so we're okay with it.  The opening scene has Fran Drescher, Chris Kattan, and Rebecca Gayheart in it and they only exist to be the first kills that set the pace.  There are some other recognizable faces in here too but I'm still too hyped on Bill Goldberg killing people as Santa.

Speaking of which, Bill has never been great on the mic.  Mind you, he's better than some *cough*Brock Lesner*cough* but every line delivered by him is great.  Sure, we get a lot of holiday puns but we do get some golden ones like "I'm Santa Claus, not fucking Dracula!" which I think I want etched on something when I die.  I don't know what yet, but somewhere, on something.  My only regret with this film is that Santa didn't give anyone the Jackhammer finisher, although I do think he speared at least one person.

I give Santa's Slay 5 ripped Santas out of 5: