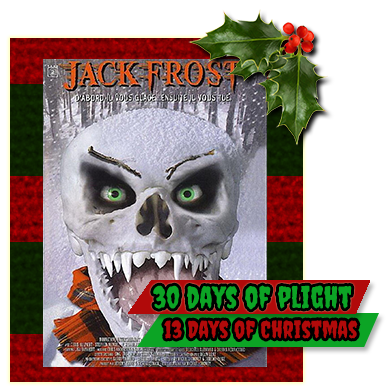 When I was in high school my friends and I rented this movie.  I'm not sure what the justification was for it aside from the fact we expected it to be terrible.  The only thing I remember of it was that the VHS box had a lenticular printed cover that would change from a harmless snowman to the one pictured above.  In truth, I think this movie was erased from my memory because it killed the brain cells that would retain any recollection of it.

I'm all out spoiling this film because it's trash.  A murderer named Jack Frost was being transported for execution when the truck gets into an accident with a tanker.  Jack escapes the vehicle only to end up getting covered in some bio-experiment goo.  He then gains the shittiest version of Iceman's powers by only being able to take form as a snowman and slowly melting into water to eventually reform on the other side of doors.  He can also make icicle spikes come out of himself but once again, only slowly and not in some sort of cool spike armor sort of way.  As the snowman he begins to kill whomever he wants while also trying to get the cop that caught him.  Eventually two of the worst government people make their way into this film so that we can learn that they're responsible for the goo that was in that truck.  Jack seems indestructible until he gets a face full of nasty snack the cop's son put together for him that morning.  Apparently the kid put antifreeze in it because he didn't want his dad getting cold. This kid is also like 13 and his parents have failed him miserably and he will probably get stolen by a hawk or something.  A truck bed gets filled with antifreeze and all of our hero characters end up sitting and bathing in it after they pull Jack Frost in with them.  Laughs are had and I died a little inside for watching this.

Fun fact:  at a networking event for my previous job I met someone that co-owned one of the production companies that put this out.  He admitted that this, as well as some other films they put out, were crap.  We both loved the special cover of the VHS though.

This movie is shit.  Even for low budget horror it was terrible.  Unlike my previously covered Santa's Slay, this movie tried to put up this front of being a good horror movie and shot itself in the dick.  Jack's lines are just creepy, gross, and unfunny.  The snowman costume looks like a shitty puppet wrapped in those sheets of fake sparkle fabric you see among the dollar store decorations.  The kid is an idiot and I'm still pissed off about the whole "I made this disgusting snack which will also murder you.  Love you, dad!"  The ending of them just laughing while soaking in the most poisonous chem-bath ever makes me want to punch out everyone that was in this film, young and old.  I'm holding nothing back as everyone here makes the naughty list.  To make things worse, this movie spawned at least one sequel.  Someone thought this was good enough to make another!

The only thing that makes this movie worthwhile is the name because the following year another film named Jack Frost was released.  It's a wholesome family comedy starring Michael Keaton as a man that was turned into a snowman with some sickly saccharine holiday plot about not being a shitty parent or blowing the spirit of Christmas while he tells you how pretty you are.  Something stupid like that.  I would like to know the number of times these VHS rentals got mixed up.

I give Jack Frost 0 ripped Santas out of 5 because I'm soooo angry at this film's existence!!: