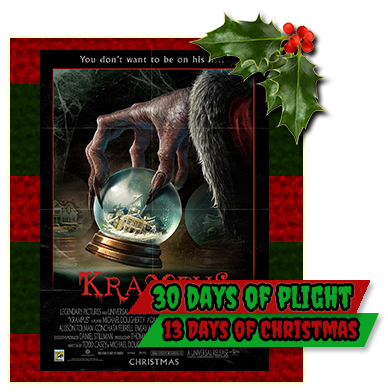 I almost impulse bought the DVD of Krampus this year.  I hadn't seen it previously but I remember a decent buzz existing around this film.  I couldn't rectify the $10 price tag I saw on it at the time though.  I like Adam Scott, but not $10 like Adam Scott.  Maybe more like $5.  $4.99 + tax like him.  Let's go with that.

Krampus takes it weird and makes it weird.  An awkward holiday get together becomes an even bigger tragedy after Max's letter to Santa is read aloud and calls out his family on most of their unspoken shit.  In a fit of anger and embarrassment Max "loses faith," tears up the letter, and scatters it to the wind.  This apparently summons Krampus, his minions, and freak snow storm that would make the North East blush.

I was disappointed with this film.  Despite an excellent cast (Adam Scott, Toni Collette, David Koechner) Krampus didn't know if it wanted to be a dark or light horror film.  It's loosely based on the lore of Krampus (like Krampus Unleashed was) and the only tie-in to its roots was that the grandmother of the family had summoned the entity when she was a child in her Germanic village.  The pacing was also a bit off but I think that this may have been more of an editing issue with how the scenes and passages of time flowed together.  Finally, the Shrek-esq gingerbread men can suck a fat fuck.

Conversely, Krampus did have some really great creature designs.  There's some sort of owl creature with a doll face that I want as a pet.  Krampus himself looked amazing and when we get our first look at him he's running from rooftop to rooftop in the most menacing manner.  He also had his own version of Christmas elves that were all wearing uniquely carved masks and need their own horror film.  Additionally there was a visual element that never gets any verbal confirmation, but each person that Krampus takes has a snowman made in their image on the family's front lawn.  I was hoping that this became a bigger part in the film (such as the snowmen would break into the house) but it never came to pass.

I think that the hype around Krampus hurt it here.  Once again, the U.S. got a giant collective boner over learning about this anti-Santa but putting a budget and some well known actors behind this really didn't pull it together for me.  At the same time I feel like my gushing for Santa's Slay earlier in these 13 Days of Christmas colors what I want in a film.  If Adam Scott was replaced with Kenny Omega or Krampus replaced with Bray Wyatt then I'd be more into this.

I give Krampus 2 ripped Santas out of 5: