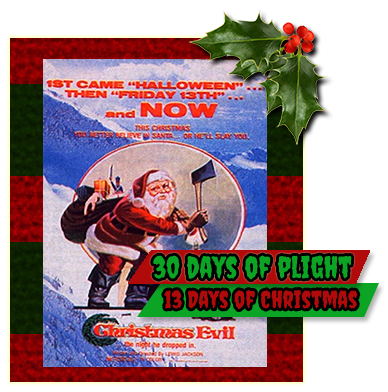 Despite coming up on the two-year anniversary of this blog, I haven't seen a lot of films that the ending happens and I question what the hell I just watched but... What the hell did I just watch?!

Christmas Evil focuses on that creepy guy that lives in your neighborhood that is into Christmas just a bit too much.  After the childhood trauma of finding out Santa wasn't real (or maybe just that Santa was about to bang his mom under the tree) Harry focuses his entire life to be Santa.  He spies on and keeps logs on the children in the neighborhood, he works in a toy factory, and he sews his own Santa suit.  A series of odd comments and phone calls with his brother show just how unwound Harry is becoming.  For the most part he is genuinely giving good kids presents but then he murders a guy from his job and some random people that talk shit on him outside of a church.  Eventually a torch bearing crowd starts to chase down Harry and his van but he just crashes through a fence and off a cliff.  Instead of crashing, the van flies through the air and into the night.  Kind of like the end of Repo Man only you just watched a terrible Christmas horror film instead of a true classic.

I opted to watch Christmas Evil instead of take a nap and that was a horrible mistake.  Everything about this film made me feel dirty.  The awkward garter play between Santa and the mom went on for way too long.  The fact that there's a nine-year-old cutting naked women out of a porno mag is weird, and then it ties into "bad hygiene" when marked in the "bad kids" book leads to an indescribable discomfort.  There's a scene where Harry covers his face in mud and leaves hand prints and a kiss mark on the side of the same kid's house.

Then there's the odd Repo Frankenstein ending.  What the hell was that mess?  Why did that exist?  Who wrote this?  Why did I watch this?  Why was this made?  Fuck this movie!

I give Christmas Evil 0 ripped Santas out of 5: