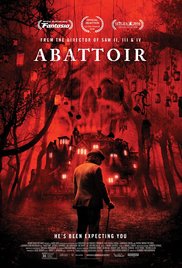 I never learned this word while I was studying French in college so I'm let down it didn't mean something cooler.  I don't know what I wanted but I feel like "slaughterhouse" doesn't really fit.  I get what they were going for, and Abattoir is much better, but suck my ass with this being "slaughterhouse."

Abattoir starts with a Henry David Thoreau quote and a narrator.  Don't let this over pretentiousness turn you off though because the plot is kind of rad.  Julia, a reality reporter (which is a thing I guess) gets a call from a man that says he just murdered her sister and the sister's family.  After the funerals Julia, with her cop "friend" Declan, go back to her sister's house to find answers.  They find the room where the murder happened completely missing from the house.  Using her reality knowledge and reporter skills Julia finds that similar occurrences have been happening for around 50 years and trace back to Jebediah Crone as well as the town the sisters were born.

For the first two acts of Abattoir everything happens at high speed.  It's paced well, but when the time comes for the third act everything screeches to a halt in order for you to get a guided tour of the payoff you've been waiting for.  If they trimmed it by 5 or 10 minutes then it would've been just right.  They didn't, it made my interest wain.  Luckily, by the very end, this film got its shit together and I was all in.  It helps that this movie has one of my favorite things: the bad guy wins.

I want a sequel to Abattoir.  Don't do the same town or Jebediah again, but the plot of everything can go much further now that we have a foundation.  Make it!  Make it happen!  Appease me!

I give Abattoir 4 copies of Vonnegut's Slaughterhouse-Five out of 5: