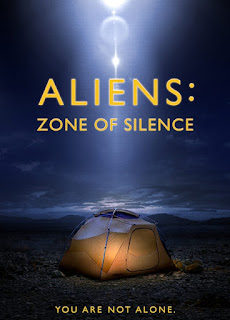 Oh found footage films, we meet again.  Only this time you're on Netflix due to an inside job.  This is the directorial debut of Andy Fowler, also known as the Director of VFX for Netflix itself.  Yes, this film is on more streaming platforms than just Netflix, the fact that this was a direct to streaming production and had no theatrical release gives you an idea of what I had to deal with here.  So why am I'm being such a cranky bastard with this film?  Journey with me, into the zone of silence...

Based off of a real location in Mexico, Aliens: Zone of Silence follows a woman as she tries to find her brother after he disappears while searching for aliens for his YouTube channel.  Similar to the Bermuda Triangle, the Zone of Silence has issues with magnetic fields and the breaking down of mechanical instruments.  Lucky for our leading woman, she has the help of Goose, an ex-communications officer in the military that seems to have his own command station at his house.  They're able to keep in constant visual and audio contact except for times when the aliens are around.

This movie should be called the White Woman: Slog of Boring.  It's just a bunch of camcorder, GoPro, and computer screen shots that were so uninteresting to watch that I listened to this movie more than I watched it.  It reminds me of the night shots of Blair Witch only they're mostly in a tent or in the daytime so it takes away the suspense factor.  Also, Goose is the worst physical actor I have seen in a while.  There's a section where he's supposed to be having this inner panic of what to do since he lost contact with the woman and it was painful to watch.  Side note:  Don't name someone Goose in your film, it makes me think of Top Gun.

We never see the aliens.  Instead we get the fake hand of a grey pushing on the side of a tent.  The final shot we get looks like someone took a picture of Jesus and/or Mary statues and then put a bunch of vapor wave video filters on them.  That's cool with the kids, right?  We can make this ending relevant to youth culture, right?  Fuck off!

I give Aliens: Zone of Silence 0 photos of Goose from Top Gun out of 5: