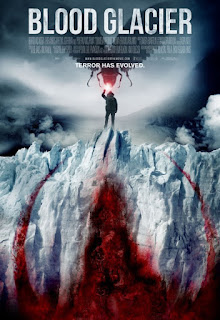 I think that, in some form, everything we do has our influences laced inside of it.  Imitation is yadda yadda yadda.  There is the issue of when we let too much of our influences bleed through and they're so easily recognized that it becomes a comparison.  I had that issue this week with The Lazarus Effect and, to a lesser degree, with today's film.

Think of Blood Glacier as The Thing and Jurassic Park getting ripped out of their minds and after a night of drunken passion this film shows up a few months later.  We have a team of scientists studying the repercussions of climate change on some melting Austrian mountain tops.  Two of the scientists notice a section of ice that looks like it is covered in blood, take samples, and are attacked by a strange creature which bites their dog.  The "blood" ends up being a single cell organism that has been preserved by the ice, but this organism mixes the DNA it comes in contact with it and brings forth new and horrible creatures.

Most of us are suckers for a cheesy monster film, and I'm no different.  While the bulk of Blood Glacier felt a bit too familiar, the monsters were all man-made and shot in hopes of you not noticing the low-grade.  One with a decent eye though can see through the quick pull away and shaky cam to see them as what they really are... masterpieces.  They may not be Del Toro film quality, but I loved each one in all of it's goofy splendor.  A bird with a wasp stinger, a pill bug with face melting abilities, an ibex and something else that I have no fucking clue what it was... all great.  The movie... meh.

I give Blood Glacier 2 Mr. DNAs out of 5 but only because of the creature creations: