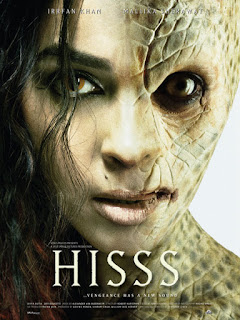 No snakes were harmed in the making of this review.  I feel like I need to have that since this film felt the need to open with that notice as well as telling us that all the snakes were rubber or CGI.  I honestly didn't need that notice because they all looked fake a shit.  Definitely a higher quality rubber snake than you can get around Halloween but damn your shit is fake.  The snake woman however, rad as hell!

We have three main characters with Hisss:  The Nagin (a female snake goddess), a police officer, and a rich white American that has stage three brain cancer.  The American hears a story that if you take the Nagin's lover then you could hold it hostage for something, in this case some form of philosopher's stone.  The Police officer just wants to find out who or what is causing a rash of strange killings with puncture wounds and poison.  The Nagin wants her lover back and also stands up for women by killing rapists and men who beat their wives.  She is the heroine this world needs.

Rubber snakes and CGI aside, this film looked great. I felt like I was getting a real view of rural India as opposed to just the opulent upper-class areas we get in a lot of Bollywood films.  The story was a little iffy at times but I never got bored with it.  Once the Nagin became this sort of avenging/defending snake woman I was 100% behind her.  I did get a bit worried that the ending was going to pull some sort of magical fix but it was the most realistic ending I could ask for with a film involving a snake-woman-goddess.