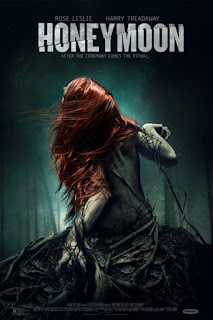 Don't confuse this with Honeymoon (a.k.a Luna de miel) that I talked about on Rank & Vile last month.  This is the other movie named Honeymoon, or one of the maybe dozen films named Honeymoon.  I just have access to these two.  Truthfully, I got the better end of the deal with this film as opposed to what I subjected Quincy and Ryan to.

Honeymoon takes us to a lakeside cabin in the woods.  Just married, and looking to get away from the city, Bea and Paul plan to spend their honeymoon swimming in a lake and having tons of sex.  It's too cold to swim but Paul is apparently ready to go all the damn time.  Our couple has a strange encounter with a childhood friend of Bea's and the friend's wife warning our duet to get away from the area.  That evening Paul wakes to find a naked and sleepwalking Bea somewhere in the woods.  Bea's behavior becomes strange, Paul becomes paranoid, and this honeymoon has become a horror moon!!! MUAHAHAHAHAHAHA!  That's a terrible joke, I'm sorry.

This film tries hard to pull an ace out of its sleeve, but in the process of doing so it fucks up and shows its hand too early.  I was taken in by the plot and the development of Bea's changes but as we get information everything starts to point toward one explanation.  I'm not gonna say it's aliens, but it's aliens.  I was hoping for some sort of lycanthrope or cryptozoological creature, but I got gross things I can only describe as cervical huggers.  Pretty much the whole third act of this film is a let down, or a beam down... am I right?  I'm not, I'm sorry again.

I give Honeymoon 2 Ancient Alien memes out of 5: