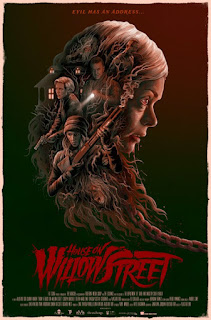 There have been a few times that I've brought up my exhaustion for possessed teenage girls on here.  Partially because it's been done to death, partially because I'm one of those assholes that will bring up the fact that The Exorcist was based off of a boy that was possessed but they changed it for the film.  I address the latter because I point my finger solely at at Regan for why we have so many demonic ladies.  Now, the question is, does this film do anything new?

House on Willow Street has four individuals that are planning a kidnapping and ransom of the daughter of a diamond store owner.  This group has to be the most textbook looking criminal group ever.  If you asked a child to draw a group of bad people then it would probably look like this cast.  They spend six-weeks plotting and despite one of their characters being the harbinger of "you can't plan for everything," they finally make their move.  The house is unlocked, no power, and strange magick symbols are carved in the back of an armoire.  Kidnapping ensues and each of our group begins to have hallucinations of people that they are grieving.  After returning to the house to find the parents as well as two priests dead a few of the kidnappers find a tape explaining what happened and what they're up against.  They then spend the next hour ignoring the primary instruction of what they should do to get rid of the demon.

I'm on the fence with House on Willow Street.  It's not bad, but it didn't wow me.  There are some great jump scares in here with the use of the dead individuals and the demon takes control of other people via an intense french kiss, but it didn't help the lackluster plot.  The criminals each get a backstory which never really gets expanded on enough.  Especially when it comes to the surviving girl because we get a whole thing where her dead loved one actually helps her out but I don't know why.  I assume it's because they died accidentally and had a good relationship with them but that's me writing some sort of expanded fanfic universe for this film and I really don't need that in my life... just like I don't need any more possessed teenage girls.  Fucking enough already!

I give House on Willow Street 2.5 bad 3D rendered demons out of 5: