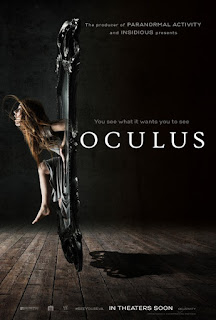 I can't remember if I mentioned this on here before, but I used to have an irrational fear of mirrors growing up.  Mostly it was mirrors while in a dark room.  The entire concept of the "Bloody Mary" game was terrifying to me.  Now kids do stupid shit for YouTube.  Back in the day you just went into the bathroom with friends and turned the lights out!

Oculus puts Karen Gillan (Amy Pond from Dr. Who) up against some sort of evil mirror.  While Karen was a child, this mirror lead to the death of their parents and her younger brother being arrested as the mentally disturbed cause of their father's death.  She tracked the mirror down just as her brother is being released and the two attempt to prove the mirror is cursed and destroy it.  The problem is that the mirror has the ability to bend reality around them so that they lose track of what is real and what isn't.

What do we do with a problem like Oculus?  I was engaged with the film for a good part of until they did one too many flashback scenes for story development.  The juxtaposition of current events mirroring the same actions our characters took as children was a nice touch, and even having the past and present overlap in the same scene would rekindle my interest.  Oculus just spends too much time telling us what we already know.  The attention to detail is unnecessary.  The mirror is evil, your parents went crazy, give us some shots of how the mirror does it and the extent of crazy, death, then deal with the mirror now.

I liked the reality bending that the mirror would do and the siblings' attempts to combat it took some interesting turns but it was just too safe.  You have something here that opens up to unlimited possibilities, and it pushes some comfort levels, but I feel like it only toes the line of what it could do.  I also don't have a good understanding of the mirror itself.  Is it haunted?  Why does this woman exist with it?  Who made it?  Did I miss these things during a bored moment?  Because that's poor storytelling then.  Step up your game spooky mirror movie!

I give Oculus 2 Bloody Mary Halloween decorations out of 5: