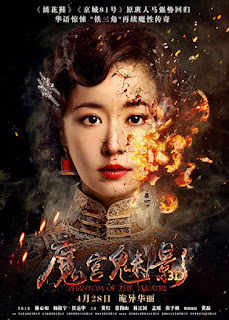 As soon as I started watching this film I began to spiral down a Wikipedia hole where I kept reading more and more about the types of Chinese ghosts.  I don't know where I got it stuck in my head that jiangshi were the primary ghost type in China.  They're not even ghosts, they're more along the lines of a vampire.  That said, there are some really awesome types of ghosts in their culture based off of their behavior in life.  Actually, both Japan and China have some really cool spirits.  We just get shit like Casper over here, and he's a dildo.

Phantom of the Theatre takes us to an undetermined time period in China.  An abandoned theatre is full of the spirits of a murdered acrobat troop which can kill by causing a person to burn from the inside out.  When a man approaches an up and coming actress to star in the film he wrote, she accepts once he decides to film it in the old theatre.  The pasts of both characters hold many secrets which rise to the surface during the filming and premier of their movie.

I don't know why I feel stunned by this, but it has been a while where I watched a film where the plot was so coherently addressed and wrapped up.  There were no loose ends, everything made sense, and the ending left me wanting.  Why is this something that is so hard to achieve in horror?   The sets and costumes were beautiful.  The visual and CG effects were acceptable although there tends to be some borderline Mortal Kombat skulls flying around (also a brief character named Liu Kang didn't help).

I think my favorite part of this film was the actual Phantom.  He looked like some sort of Chinese King Diamond.  Look at him over there.  He looks like he's going to break out some sweet Merciful Fate covers or talk to you about his interest in black magick.  If Phantom of the Theatre was just this guy killing everyone then I would've given this film the highest rating ever!  Instead...

I give Phantom of the Theatre 4 Kennywood Phantom Fright Night logos out of 5: