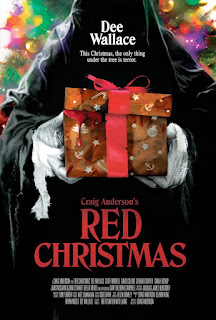 Uggggghhhhhhhhhhhhh.  I think that this might be the first movie that caused me to say "this movie sucks" out loud to an empty room.  It wasn't even a quiet comment.  It was an exclamation of dismay at the fact that I had resigned to sit and watch this movie.  It was my acquiescence to being the vehicle of my own of my own torment.  I know now what lead a samurai to commit seppuku in order to pay for his own sins so that he may hopefully redeem himself upon death.

Red Christmas is an Australian slasher flick where my suspension of disbelief went out the window from the start.  Opening on an abortion clinic where a someone set a bomb, we have a bucket slapped with a biohazard sticker contains a living baby... somehow.  I don't know what Australian abortion laws were 20 years ago, but I'm pretty sure third trimester abortions were not a voluntary option.  The bomber finds the bucket baby and leaves.  Twenty years later we get a family celebrating Christmas when a man wrapped in bandages and wearing a cloak shows up on their front step.  I wish it was Darkman because I would much rather watch Darkman.  It ends up being the aborted child of the family's matriarch.  Her choice for the abortion was because they already had a child with Down Syndrom and this baby was going to born with it as well.  On top of that, her husband was diagnosed with cancer (I think) and she couldn't handle the situation.  Not Darkman starts killing everyone because he isn't loved by his real mom.

This film was the hottest trash.  I felt like the entire thing was set up to be this big "Look at her!  She's the real bad guy because of her want of an abortion!"  We do get a view of the killer without his hood and bandages and I almost flipped a fucking table because they made him this horribly deformed creature.  I'm surprised the actor that legitimately had Down Syndrome didn't turn to the director and just go "are you fucking kidding me?" when it was revealed.  I couldn't handle this entire mess.  I actually have the note "fuck this entire film!"

The only shining light of Red Christmas comes from the kills.  We get a one-and-done axe blow that splits a woman in half, an amazing bear trap on the head kill, and a priest's rubber head shooting blood out of the eyes.  Look up a kill montage on YouTube or something and avoid the shit out of this film.

I give Red Christmas 1 copy of Darkman out of 5, only because of those kills: