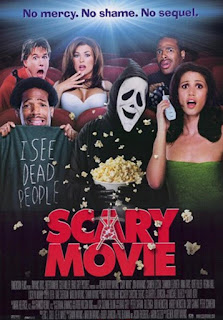 They say that imitation is the sincerest form of flattery.  Unfortunately the Scary Movie franchise has passed the point of flattery by milking the horror genre for at least five films.  By some divine fate, I rolled the original movie from way back in 2000.  I remember being home from college for a holiday break and renting this film.  It's weird to return to it nearly 18 years later and view it through a more mature lens, but not mature enough to pass up giggling at a dick or fart joke.

Scary Movie takes the plot of Scream and mixes it with a bit of I Know What You Did Last Summer. After blending these together they threw in a ton of awkward adolescent boy humor and that's the film.  There really isn't much to the plot if you've seen the original Scream and know that there's a masked killer murdering teenagers and focusing on a central girl (in this case, Cindy instead of Sidney).

Scary Movie falls under those awkward guilty pleasure films for me.  I'm a fan of the Scream franchise and I like how they spoofed it.  The things that kill this film for me now are the rampant running gay jokes and just how much this film relies on locker room humor to exist.  It dates this movie and makes it feel out of place in today's world.  Then they ran this idea into the ground by making multiple movies full of adolescent humor and it leaves a bad taste in my mouth.

I give Scary Movie 2 weed leaves out of 5: