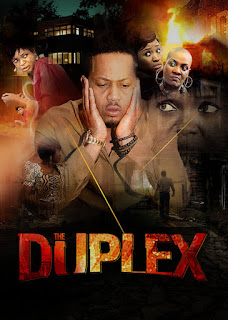 The Duplex is our first Nigerian horror film here on 30 Days of Plight.  A couple buys a home for an insanely cheap price only to have the pregnant wife repeatedly seeing some sort of specter move about their house.  Eventually the spirit causes the woman to miscarriage and it leaves with the baby.  This becomes the turning point for the man to see the ghost instead and then finally attempt to deal with the issue.  It's kind of dickish.

This film is rough around the edges.  The elements are all there but the script is just too long, the effects are behind (in comparison to U.S. films), and the plot needed some tightening up.  I did enjoy that the film brought in the idea of the entity being some form of "spiritual warfare" being waged by someone in the village.  We tend to assume that how people practice their faith is similar to what we know but there are variations everywhere because of exceptions that had to be made to integrate a new religion... other than swords, guns, and colonization.

If I had to sum up The Duplex then I'd say it was a roller coaster, but a shitty roller coaster.  I was all on board for it at the beginning but after two hours of the slow incline I began to wonder where the hell this was going and then suddenly it was over and I was told to exit the ride.  Then I get off the ride to find out someone stole my Motley Crue "mirror" I won in at the dart throwing game because people are scum!  That never happened but I'd cut a fucker for stealing my Motley Crue mirror if I had one.

I give The Duplex 1.5 Bible Adventure cartridges out of 5: