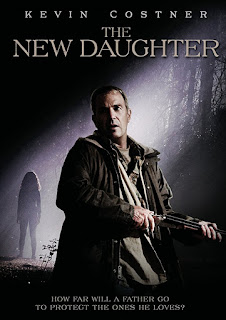 I haven't watched a Kevin Costner movie in years.  I was also was confusing him with Kevin Bacon before I hit play and spent a bunch of time thinking about how I unnaturally love the film Stir of Echos.  Seriously, I have some strange horror boner for that film.  It's not that great.  The plot is okay.  It's much better than this piece of shit and I would much rather have watched Stir of Echos over The New Daughter.  There are a lot of things I would rather have watched than The New Daughter.

Okay, let's go over this mess.  Kevin Costner's wife leaves him for another guy and KC and his kids move to a house somewhere else.  I don't think I paid attention where to.  In the back yard is a mound of dirt which holds a bunch of made up shit that they try to pass off as Native American.  His teenage daughter begins to change and make a nest in her closet, he doesn't know how to be a father or act outside of some strange Clint Eastwood-esq growl/yell type thing, and his youngest son fucks up the whole ending of the film with poor emotional acting.

The New Daughter has nothing redeemable about it.  There are scenes of nothing, the characters don't evoke any type of emotional response from the viewer or each other, and the creature reveal is incredibly disappointing.  The fact that someone had this shitty idea and then just thought "meh, I'll make this some sort of Native American shit," makes me want to throw a book at that person.  Read something other than your bullshit high school notebook drabbles that make your friends think of you as their "writer" friend.  Then choke on a million dicks.  Exactly one fucking million.  I'll count them to make sure you at least do that right.

I give The New Daughter 0 whatever the fuck this is out of 5: