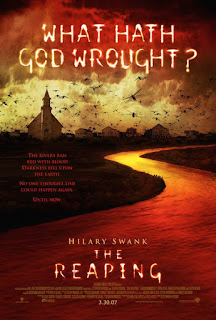 I love films that involve Satanic cults.  I dig this plot device because it's always more in line with some sort of hold-over "Satanic panic" idea of Satanism as opposed to LaVey Satanism or  Luciferianism.  It's as if everything has to be the extreme opposite of anything that people view as holy.  I also love biblical references, especially when it comes to something like the 10 plagues of Egypt.  This film served up both of these, so how well does it deliver?

The Reaping follows Katherine, an ex-priest that spends her time going to sites of assumed miracles and debunking them through scientific means.  As an aside, I would 100% be down for this as a career.  Katherine gets a call from a friend/priest warning her that photos he has of her burned themselves into a backwards Blue Oyster Cult logo and this is a sign of something to come.  She is then called to the town of Haven, Louisiana (it doesn't exist, I checked) because their river has turned to blood.  During her investigation the other plaugues continue to manifest all while she uncovers a secret Satanic cult attempting to bring about the Anti-Christ.

I liked this movie more than I should have.  The random made up prophecy of bringing about the Anti-Christ was cheesy in a good way.  Katherine's back story could've been flushed out a bit better because her reason for leaving the cloth comes from such an extreme situation it's hard to believe.  It mainly exists so we have a reason for the friend-priest to be in this film and be in contact with her.  The Reaping pulls a twist and an ending reveal, both of which caught me off guard.  So kudos to you 11-year-old movie.

I give The Reaping 4 BOC albums out of 5: