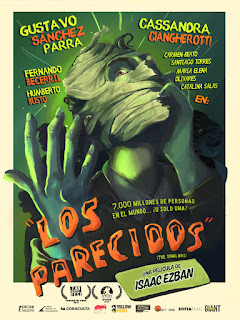 My family didn't get cable until I was in high school.  Prior to that a majority of my sci-fi/fantasy watching were Brisco County Jr. and the random things you got on Saturday afternoon.  Mostly Xena and Hercules unless you got stuck with Cleopatra 2525 (which my husband just sang the theme song to me when I asked him if he remembered the name of it).  Once I had cable I had access to the Sci-Fi Channel (now just Syfy, I think) and their airings of Twilight Zone, especially the New Years marathons which became background staples at celebrations from high school on with friends.  My love of The Twilight Zone runs deep, so when I started watching The Similars I felt that I had found a long lost episode.

Over the course of a single night in 1968, eight individuals find themselves trapped inside of a bus station just outside of Mexico City.  Their small world descends into chaos as the two employees appear to be suffering from strange injuries and are claiming that one of the men there is the devil.  While this is going on we receive updates via radio that the rain outside isn't earthly and is part of some strange world wide weather phenomenon.  The people inside want out, they want answers, and when they get them it's not what they expect.

I loved this film.  It's colored with a grey tonality over it but as everything progresses the color fades from the film totally until the end.  The turns this movie takes are on par with anything I'd see Rod Serling pull.  We even get a narrator voice over at the beginning and end.  I really couldn't find anything bad about this film if I tried.

It does remind me of two specific episodes of The Twilight Zone though.  The first being The Eye of the Beholder (where a woman is getting surgery to become "normal" but it fails and although she looks beautiful to the viewer, her race doesn't look like that and she is the ugly one).  The other is It's a Good Life which I won't go into as it gives some of this film away.  If you're familiar with it then you already know.  And knowing is half the battle.  GO JOE!

I give The Similars 5 TV Guides with Rod Serling on the cover out of 5: