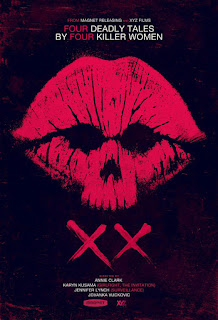 Anthology horror films have started to pop up more and more.  We have the V/H/S films, Southbound, The ABCs of Death series, and now we have XX.  An anthology where the focus is on the women in horror that aren't scream queens, but are the ones that make the scream queens scream.

XX consists of four short films: The Box (based off of a Jack Ketchum short story) where a boy catches a glimpse of what's inside of stranger's present and he is never the same.  The Birthday Party which has a mother about to host her daughter's seventh birthday party only to find her husband dead of pills and booze and she tries to hide his corpse.  Don't Fall, where four 20-something campers stumble across an area which caries a violent curse.  Then the final short is Her Only Living Son, in which a single mother is dealing with the fact that her son is coming into his own around his 18th birthday and the past catches up to them.  All four of these are framed by strange stop motion sequences which I could only describe as if a living house were into gothic-lolita.

I was glad this film came up because I spent a lot of time this week trying to remember where I saw The Box before.  It's my call for the strongest of these shorts but each of them are really well done.  If I had to pin one down as the weakest short then it would be The Birthday Party. I'm only saying this because when you get to the very end you realize it was a 15 minute set-up for a joke, and it's one of those jokes though where you kind of laugh but then do an exhaled sigh at the end because a part of you just died for laughing.  It is worth watching though because the styling and usage of color are fantastic.  Also, I would like a large purple toilet costume.