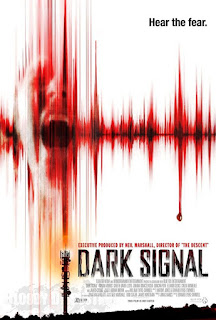 My husband hates when I tell stories.  Despite the fact that I write summaries on this blog, when it comes to telling an actual story I feel the need to make sure all my bases are covered.  So instead of a simple "the cat farted today" I tend to add in extra details to set up the situation.  It usually kills the story.  This movie though, it made my story telling seem like the greatest oral literature ever.

Dark Signal is like someone took a bunch of speed and then audio recorded their ramblings to write down later.  Then, instead of editing, they just went with it.  I'm going to try to keep this short.  There's a serial killer named the Wedding Band killer because he cuts his victim's ring finger off (although, later he seems to just take any finger).  Laurie, our main character, needs money for her and her wheelchair using son.  The son is the only person we know nothing about even though he has a demon voice for a bit, and even that gets ignored as far as an explanation.  Laurie has an online friend named Ben who works at a radio station that has just been bought out and so the host is doing her last show.  There's a stupid amount of back story for this radio host for no reason except to tie her to the killer of this film.   Also, they have a psychic medium on as a guest (for some reason) and they contact a ghost which is telling them about a possible victim of the murderer.  Back to Laurie and her boyfriend that offers her a cut of the cash if she helps him rob a house.  They go to the house but it ends up that the killer is also in the house.  A ton of unnecessary story telling and explanations happen, the killer is revealed, I wanted to flip my coffee table in disgust.

"The spirit of a murdered girl returns with a message for the staff of a local radio station" was the summary I was given for Dark Signal.  I thought I was going to get some sort of Pontypool with ghosts instead of zombies.  This film is seriously four different movie plots they crammed together.  We have Laurie and the robbery, the radio station, the ghost the psychic contacts, and the serial killer.   Calm the fuck down and pick one, maybe two, and go with it!  You don't need all of this!  Aside from a telegraphed jump scare there isn't anything else to complain about with Dark Signal, but I can't let this slide.  Don't watch this.  It's not worth the loss of what precious time we have on this Earth.  I took this bullet for you, you owe me a life debt.  Expect a call from me at some point requesting a pizza.

I give Dark Signal 0 danger signs out of 5: