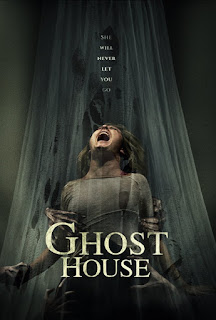 At some point soon I would like to write a book that's an "everything I needed to know about life I learned from horror movies" type thing.  In it I plan on having a section on foreign travel because holy fuck do white tourists just do the dumbest shit!  Agreeing to ride out to the country in a foreign land with people you just met, yeah, fucking stupid!  Taking an object from something called a "ghost house," you're an idiot!  Basically being a tourist, you're probably an asshole, and I say that living in a city that is a tourist wonderland.

Ghost House sets us up with a couple on vacation in Thailand. On their first day they befriend two other tourists that are staying in their hotel.  After an evening of drinks and strippers our couple is convinced to go out to a remote spot because the fiancé is jealous of her man friend having lipstick on his face and she is told that she could get some cool pictures out there.  The other couple tricks them so that a spirit possessing their friend will possess our cranky lady.  Now, with the help of their tour driver (Gogo) our man seeks out all kinds of shaman and mystics to save his betrothed.  He has three days to do so before her soul is taken into the abyss.

This film had a really sharp reverse bell curve.  It started out strong, despite relying heavily on jump scares, but there were about 15-20 minutes where it just couldn't keep my interest.  By the end of the film it came back around and I want to create an award just to give to the actress that played the witch at the end (or whatever she might be called, my occult knowledge doesn't extend too far into Asiatic countries).  She by far has the best "fuck you I did it!" laugh I've ever heard.

As for our ghost woman, except for the very end she is shown in quick and jerky shots.  We get a few close-ups which end up disappointing because the facial appliance looks a bit rough.  I don't know if it's what they molded it out of, or the paint job, but it looks a bit too Halloween mask for me.  I've also been rewatching Syfy's FaceOff from the beginning and I'm finding myself more critical of stuff like that.  Curse you Glenn Hetrick!

I give Ghost House 2 ghost houses out of 5: