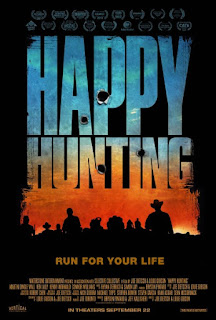 This is an odd way to start a review, but I feel that the term "redneck" gets overused in horror.  It has become a catch-all for any non-urban/non-suburban villain character(s).  Take this film for example.  The descriptions mention the townspeople as "rednecks" but I find them more akin to the villagers in Shirley Jackson's The Lottery.  Their actions may be shocking and wrong to us, but to them it's what they have been doing for ages.  I'm not justifying either groups actions here as by modern social and moral standards both are viewed as wrong.  The people here don't really fit the stereotypical overalls, flannel, banjo playing bumpkins we typically visualize, so why not find a better term?  Anyway, let's get back on track here.

Happy Hunting's main character is Warren, a crank making alcoholic.  He receives a call from Mexico saying that an ex-lover has died and that he has a child.  Warren mans up, tries to quit drinking, and sell some bunk crank to make it to Mexico.  The deal goes south but so does our man until he ends up in the town of Buffalo Flats.  It's a town known for its rich hunting heritage despite being a desert region now.  He arrives just in time for their annual hunting festival where this quickly turns into The Most Dangerous Game with Warren and four others attempting to flee from the towns elite huntsmen.

It's been a while since I've watched one of these Running Man style films.  While it lacks the panache of a lot of its predecessors I can't really find any heavy faults with Happy Hunting.  Sure, we have a ton of time spent in the desert without much action but I found myself on Warren's side and had some emotional reactions to characters being killed.  I also appreciated the speech from the Sheriff about the hunt being about how they "deal with problems," in this town.  Once again, it doesn't justify their actions, but it helps you understand them.  Overall, I'm probably not going to watch this film again, but if it's already on somewhere then I'm not adverse to seeing it again.

I give Happy Hunting 2 copies of Guns & Ammo out of 5: