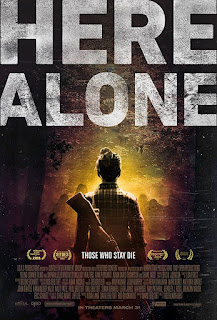 About 10 years ago I was working for a city library system.  One of my co-workers had just finished reading Cormac McCarthy's The Road and suggested it to me on the grounds that he thought I would like it and he wanted someone to discuss it with.  He was wrong on the first part and my biggest complaint was that the book had a repeating pattern of "nothing but us/oh shit! danger/nothing but us/etc."  I bring this up because today's film was like a shittier version of me reading that book.

Here Alone is a post-zombie-apocalypse film where our female protagonist is the surviving member of her family.  We get flashbacks of her learning outdoorsman (outdoorswoman?) techniques from her husband and brief moments of what happened (viral outbreak) but mostly this is just the lady of the woods eating worms and pissing in buckets.  Eventually a man and his step-daughter end up in the film in an attempt to break up the fact that now it's just three people in the woods, but whatever.  There's a brief heel turn which I think is because the step-daughter has a lady boner for her not-dad but I might be writing my on narrative into this film out of boredom.

There's not much here.  I think we see a total of three zombies and one just looks like he's a metal head swinging his hair around to some thrash.  I wish the only person in this entire film was the woman to really push that feeling of self-survival.  Otherwise there is nothing to write about, or watch, or care about here.  Just the lady of the woods covering herself in dookie and dumping buckets of piss on herself.  So if you have filth fetishes, then this film is for you.

I give Here Alone 0 copies of The Bad Movie Bible out of 5: