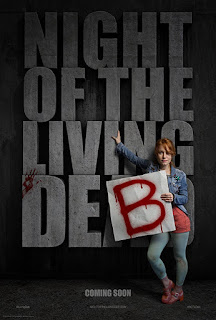 Both on and off of this blog I've watched a lot of horror comedies.  Sometimes you want to be able to laugh while also seeing gore as opposed to laughing at the poorly done gore.  John Dies at the End, Tucker & Dale..., Shaun of the Dead, Deathgasm, all great examples of mixing hilarious comedy with fantastic horror.  So what happens when a horror comedy does neither their horror nor their comedy aspects well?

Night of the Living Deb doesn't have much going for it in the plot department.  Deb attempts to hit on a guy without knowing his fiancé is there and pissed at him.  They end up getting drunk and passing out back at his place.  The next morning is awkward but then so are the zombies that exist everywhere now due to water contamination by the water company owned by the guy's father.  That's about it.

There's an attempt at an awkward romantic angle here but the dialog feels really forced and disingenuous between our leading characters.  It's only made worse by 90% of the lines in this film attempting to be jokes.  I had a few laughs while watching this but to be bombarded with mediocre humor consistently made me dislike this film even more.

If I had to sum up Night of the Living Deb in a few words then I would say this is the equivalent of some college friends realizing one of them had a video camera and trying to make a zombie movie in a weekend.  Okay, that's more than a few, but we're not quite at "shit sandwich" level of bad with this film.

I give Night of the Living Deb 0 copies of Shaun of the Dead out of 5: