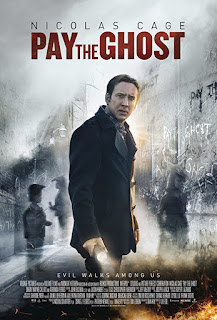 I've been spending a lot of time recently looking into prop design, especially when it comes to stop motion animation.  One of the main things you need when doing any stop motion is a foundation.  Normally it consists of a table-like structure so you can make sure your puppet doesn't fall on its ass every time you pose it.  The foundation is extremely important because it's going to hold your set, your characters and, at its essence, your story together.  I mention this not because I would like to work for Laika in their design department (but seriously, Laika, that would be my dream job, hit me up) but because this film, stripped down, had a really interesting story concept for the foundation.  Unfortunately, instead of making interesting characters and a great setting they chose to whip out their collective parts and piss all over the foundation.

Pay The Ghost is Nicolas Cage being a distant father while attempting to get tenure at his university.  He misses trick-or-treating with his family and to make up for it he takes his son to a Halloween carnival around the corner.  His child promptly vanishes after asking Mr. Cage if they can "pay the ghost."  Skip to a year later and ol' Nickleback has put together a crazy board of missing kid cases and finds connections between Halloween, missing kids, the phrase "pay the ghost," and eventually a poorly constructed witch story where they take actual pagan symbols and give you half stories about them while they make a bunch of shit up to fit their narrative.

I'm probably not doing it justice but as I said, the foundation of the story was good.  Witch woman steals three kids everyone Halloween to avenge her lost children from a time when people didn't wash their ass regularly.  I'm on board with that.  From there though it starts to get muddy.  There are some great scenes where the witch absolutely wrecks people with some sort of ghostly Falcon Punch but mostly it's Nicolas Cage playing a crazy Nicolas Cage character and everyone else is along for the ride.  I was expecting a "he saves his son but sacrifices himself" ending but nope, everyone's happy, except me because I watched this and because the sequence after the first credits made it seem like they had a sequel in mind.  Fuck that!  I'll pay a ghost to not have another of these movies exist!

I give Pay the Ghost 1 piece of Joss Paper out of 5: