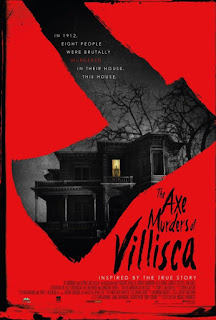 If you look at the little bit of white text under the title on this film's poster you'll notice it says "inspired by the true story."  So of course this sent me into a research spiral five seconds into the damn movie when it quotes some random reverend about hearing voices to murder.  The axe murders in Villisca, Iowa was an actual event that happened in 1912.  The variation in this film and the actual story (ghost possession aside) was that there were multiple suspects but the Reverend was the only one tried... twice.  The first time it was a hung jury and the second time he was acquitted.  Although he did have a history of being a perv and later ended up in a psych ward after sending what could be the first documented unsolicited dick pics.

The Axe Murders of Villisca establishes way too much personal back story for three twenty-somethings posing as high school students.  Somehow this group of faux misfits end up going on a road trip to this murder house so the one guy can record it for their YouTube ghost hunting show.  After they're booted from the home because the girl is a dunce they agree to break into the house at night and use candles and dowsing rods to speak to spirits.  It's a slapdash operation but one Instagram post later we have the weird semi-jock and his friend drive out in an attempt to cause some sort of harm to the others.  Instead, the demon or ghost or whatever is in this house possesses the semi-jock and he kills his friend and then others get possessed and everything becomes a mess.

The only upside to this film was the fact that it made me seek out information about an interesting unsolved murder.  But a film shouldn't make me want to do that during the whole film.  This was an IFC film but it feels more like some farm club production that got called up to warm the bench for the pro team and jumped on ice during some sort of line change confusion (I played ice hockey most of my life, those are my go-to sports metaphors, deal with it).  The actors were too old for their parts, there's no real understanding of why multiple people are possessed at the same time or if the mirrors hold a greater meaning to things.  Also, did they have Fireball candy back in 1912 and how did a fucking Fireball from 1912 exist to modern day?!  Fuckin' ghost magic!  Too bad they couldn't have used that to make this movie good.

I give The Axe Murders of Villisca 1 copy of So I Married an Axe Murderer out of 5 but only because this film lead to me learning something: