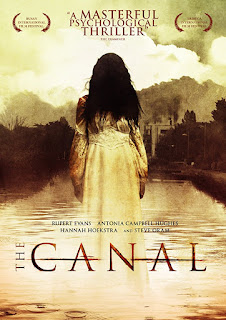 Ireland.  All I really know about it, from the top of my head, is the following:  A history of strong political discord and activism, potatoes, the WWE wrestler Sheamus, and the stereotype of Boston police being Irish.  I'm sure there's more but right now I'm too lazy to attempt to recall additional info.  Why am I even rambling about Ireland right now?  It's because today's film comes from the Emerald Isles!

The Canal focuses on a family of three, at least until they become a family of two.  The husband, in the course of his archivist work, finds that their home has a history of strange murders in it.  In his paranoid husband work he finds his wife having an affair.  After stumbling into a toilet that makes Trainspotting blush, he sees a strange man attack his cheating wife.  Unable to save her, or stay conscious, he comes to and calls the police.  The cops assume it's him, he begins to think it's the ghost of a man that haunts his house, and his sanity seems to dangle from a thread.  Was it ghosts?  Was it his own cracking mental state?  Was it a ghost that flew up his ass and used him like a murder puppet?  This is where I would make a "C-anal" joke but I'm trying to avoid it.

There's the old adage of "children should be seen and not heard," and when it comes to celluloid there are definitely some kids that I feel should not have been given the opportunity to be on film.  I bring this up because the child in The Canal has perfected his mumble-core acting at such a young age that it ruined scenes for me.  I didn't even have an issue with his accent, just his annunciation of words.  Plus he's one of those kids that his acting just doesn't seem to fit the emotion of the moment.  I feel bad for talking shit on him though because he's young so there's a lot of room for improvement over time.  Hang in there kid!

One thing that I did love about this film was the very ending of it.  I mention time and time again on here when a movie tips its hand and I see the ending coming early but the very end of this film caught me by surprised and I got super hyped on it.  Honestly.  It went down and I yelled "OOOOOOOO RAD!" at the TV, and then the movie was over.  This isn't the kind of film though where I could just tell you to watch the ending though because the whole is greater than some of its parts.  I'm not saying this is a perfect film, it reminded me a bit too much of the first season of American Horror Story, but I'm not going to write this one off.