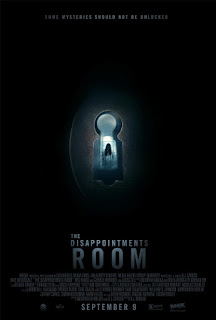 I like learning new things.  My mind is a collection of random and pretty much useless facts that exist for moments like this where I get to impart something I learned.  So here goes.  A "disappointments room" is a real architectural piece.  When someone, usually of affluence, would have a child that had some form of birth defect or a form of neruo-diversity that would cause them to pass as anything but a "regular" child then they could end up in one of these rooms for the rest of their life.  The family or possibly one staff member would help take care of them but they were hidden from the public.  While archaic, there have been recent cases of such things in Louisiana and Texas.  This film takes its influence from, of all things, and episode of an HGTV show where one of these rooms was shown.  The one in the show was actually made to look like a small home and still seemed  to have love with it as opposed to the one in this film.  But I'm getting ahead of myself...

The Disappointments Room has a family of three leaving their city life to move into a grotesquely large home in the country.  Abandoned for years, the building requires a lot of work and since the wife is an architect she has taken up the task of working on it.  When exploring the acting she finds a chest blocking a locked door.  The key is found and our leading lady opens the door. This is where things get weird because a lot of this is pointed at being ghosts of the original owners, but our woman is the only one that really has any direct interaction with these spirits.  There is one side character that ends up hanged in a tree by a grave which, now that I think of it, never gets dealt with.  Either way, the room causes something to happen.

If that last paragraph didn't point it out, I felt confused during this film.  We had scenes of horrific situations like a dog attack on their young son or a ghost attempting to smother the same kid, but they would be strange hallucinations or thoughts the mother was having.  There was also some sort of odd sexual tension between the mother and the side character but it really didn't need to exist and served no part of the story.  There was also an adorable fluffy cat that was killed off camera. If I haven't made it obvious in my time doing this blog, fuck that noise!

The ending of this film was also confusing.  Everyone just seems like "Okay, let's leave this place" and is totally fine with each other despite the big crazy ending.  Also, the door is taken off its hinges and put aside but I guess the ghosts fixed it so it could slam in the last shot?  Fuckin' handyghosts!  How does one summon those to fix things in the house because I need some electrical work done in our home?

I give The Disappointments Room 1 HGTV logo out of 5: