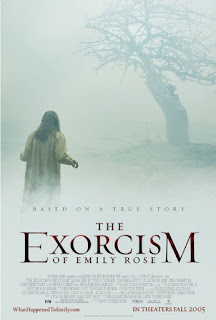 Years ago I went with a group of people camping.  As night came, and we were sitting around the fire, we started attempting to tell ghost stories.  One of my fellow campers said he didn't have any ghost stories but he had seen this film so we told him to try and recap it since none of us saw it.  The next five minutes were a hodgepodge of a story which ended with the most blasé "and then she jumped out a window and died."  Everyone laughed their ass off and to this day I still think of that as a punchline to terrible stories.  Post script to this story, that isn't what happens.

The Exorcism of Emily Rose is barely a horror movie.  In truth this is a court drama that happens to revolve around priest that is being blamed for negligence in the death of Emily.  Most of the time is spent with lawyers and witnesses arguing between the science of the physical word and the existence of the spirit of the supernatural.  We are told the story from start to finish and there are some scenes of Emily before and during her possession but it's overshadowed by the litigation.

If I would've paid to see this film in theatres and this is what I got then I would be pissed.  The only saving grace of Emily Rose is Emily herself.  Jennifer Carpenter (Dexter) does a lot of the physical contortions on her own as well as her facial expressions and voices.  I spent some time looking into facts about this film and she was cast at the audition because she scared the director.  Big ups to you, Jennifer.

Speaking of the director of this film, I came across something saying that he wanted people to leave this film with more questions than answers.  You have a fictional court case and exorcism based off of a real account that happened in Germany.  You can't make something up and then have people seek out answers when you've created the universe it exists in!  Here's my question for you, why is this movie two hours of the most boring "horror" ever?  Riddle me that, Batman.

I give the Exorcism of Emily Rose 1 romance paperback titled "Exorcism" out of 5 (and that is only for Jennifer Carpenter):