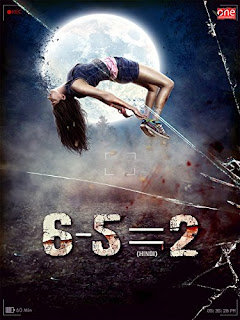 Three days deep and we get our first "found footage" film of this Cut.  I wanted to rip into this movie right at the start of this review but I decided to take a moment and look into it a bit more.  This is really a bare bones production done on a shoe-string budget.  It's the director/producer's first film and there wasn't much of a crew.  I'm filling you in on this info because it's something that I'm taking into consideration.  I came into myself thanks in part to a very DIY punk scene in Pittsburgh, so I can respect this kind of lo-fi production.

6-5=2 is a film out of India where a group of friends go hiking on a random mountain path.  I'm having trouble remembering what their actual motivation is for this because I've had a lot of Indian found footage films I've ended up watching for this blog.  This movie turns into a bootleg version of the Blair Witch quickly (a film which was said to be the major influence) with faux graves appearing in the night, cameras catching weird behavior, and everyone being lost.

This isn't the best horror film I've ever seen, but it's also not the worst.  The Blair Witch and Paranormal Activity influence is far too heavy and feels more like copying than just an homage.  This is especially prevalent when they use an alternate Paranormal Activity ending where the remaining female walks up to the camera and cuts her throat in front of it.  The parts I liked were really more of things that maybe only I would enjoy.  For example, during one of the evenings a girl sits up and starts doing some sick thrash metal hair spins for about a minute.  I was waiting for some DRI or Municipal Waste to kick in, but it didn't.  The other thing I liked was a brief ghost appearance that lead to my note of "Oh shit! Special appearance by the Babadook!"  So as I said, only dumb stuff that got me excited.  As for the rest, they made a movie with what they had.  That's more than I can say for a lot of us.