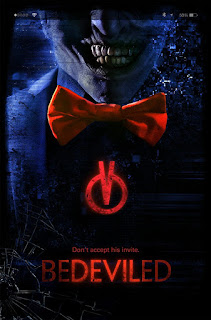 When I was a kid I was easily scared by all kinds of dumb stuff.  Most of it being something related to the supernatural, but all of it being stupid shit that kids get scared of.  The concept of "apps" didn't exist until after I was out of college, but let's just say, for one minute, that it existed when I was a child.  There is no way in hell I'd be scared of an app with a silhouette of Pee Wee Herman on it!

Bedeviled is like someone took the original Nightmare on Elm Street and decided to make Freddy some sort of spooky demon in app form.  After a local girl is found dead of what seems to be heart failure all of her friends receive a request from her to download Bedeviled.  What starts out as a much better Siri turns into an evil presence that feeds off of fear and has no problem bending time and space to scare the hell out of anyone with the app.

There are some saving graces in this film.  The entity can only exist and manipulate digital technology so anything analog is safe.  They end up finding a reel-to-reel recording which helps the remaining two in their attempt to delete this thing from their phones.  The app tricking a lot of them into revealing their biggest fears to use against them was also well done, except for the teddy bear.  That was just trying too hard.  The final nod (and I assume homage to Elm Street) was the mom ending up with the app on her phone at the end.  It was like the mannequin being pulled through the door by Freddy.  Unfortunately, these just weren't enough to bring me around to recommend this movie.

I give Bedeviled 1 iPhone out of 5: