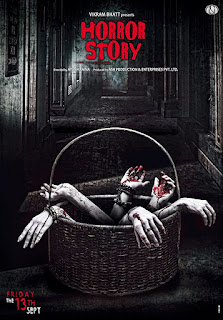 I don't mind subtitles in films.  In fact, I would much rather have subtitles instead of a terrible dub where the context gets changed.  Like that episode of Pokemon where they're eating rice balls but keep calling them donuts because they assumed English speaking children wouldn't know what a rice ball was.  What's even worse though is when the character is speaking English but the subtitles say something different.  It's definitely one of those "you had one fucking job" moments that confuses the hell out of me, and it happened multiple times during my viewing of this.

Staying in India, Horror Story takes the always hard to believe plot of a group of friends out partying the night before one of them is about to move away.  I've moved multiple times in my life and you do not go out and fucking party the night before unless you have a moving service hired and someone is going to drive you where you're moving to. I'm getting off topic but I hate this plot line in horror.  Anyway, our group decides to go to a supposedly haunted hotel because trespassing and breaking and entering are always good ideas the night before someone is moving.  This hotel ends up not just being haunted, but super haunted as it was previously a mental hospital that had a violent patient that claimed to have married Satan in it.

Horror Story is really just a series of dumb decisions.  The bending of the space of the hotel was a nice touch but in truth it's nothing that really made me want to become engaged with this film.  I will say that the hotel "library" having an occult section meant that this was a classy establishment, and the final run with a hand full of fire was climactic, but the rest was a snoozeroo.

I give Horror Story 0 H.H. Holmes houses out of 5: