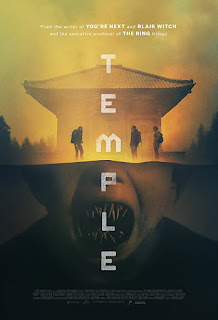 Horror films have taught me many things over the course of my life.  One thing is that children are most likely all ghosts or the devil.  Just because that creature was "born" doesn't make up for the fact that there were a solid nine months where you had no idea what it was really doing in there.  I've seen sonogram images that look like that thing is summing all the powers of the dark lord into him!  Seriously! Do you have multiple children?  Well then one is a ghost and one is Satan, or they're both the ghost of Satan, I don't know.  I don't have kids!

The Temple takes us to Japan where white people act like entitled assholes and can't take "no" or "not for sale" for an answer.  A woman finds an old journal in a used book store but when she attempts to buy it the shop owner tells her that the book is cursed, not for sale, and kicks them out and closes up shop.  If this isn't a sign of "don't fuck with that book," I don't know what is.  Of course, one of the men with her goes back to find a small boy in the shop and buys the book from him (red flag #2).  He stops at a ramen stand where he is told by the chef and the other patron to not go to the temple in the journal (red flags #3 & 4), but one of them still tells him where the temple is.  So guess where these people all go the next day?  This plot is trash.

I was really hoping for something great when this film started but it took me down a long and lonely road of boredom.  I held no sympathy for any of these people because they're all trash and multiple levels.  It's the deepest trash I've ever seen.  An ocean of trash.  The only thing that caught my attention was maybe three to five seconds long and it was the guardian spirit of the temple coming to life and attacking one of the men.  The rest of this film can be shot into the sun for all I care.

I give Temple 0 dumpsters out of 5: