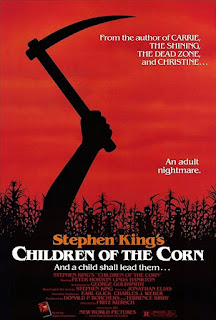 You know that scene in Spaceballs where Yogurt is talking about the merchandising of Spaceballs and shilling things like Spaceballs the toilet paper, Spaceballs the three-hole punch, or whatever?  That's kind of how this felt.  Although, instead of selling you something it makes sure that you know that this is a work by Stephen King.  The title card and poster both say "Stephen King's Children of the Corn," as well as having other works by him listed, and it goes as far as to have a copy of Night Shift (The post Penthouse option for this story) sitting in paperback form on the dash of the outlander's car.  I'm surprised the two helpful kids here haven't had their names changed to "Stephen" and "King" for the film!  Okay, I'm jumping too far ahead of myself now.

Children of the Corn takes place in Gatlin, Nebraska where a drought has caused a lack of crops in this farming community.  A boy, Issac, gathers the other youths in the town, claiming he has some divine contact with a entity known as "He who walks behind the rows," and gets the children to murder all of the adults in the town.  Once this is done the corn crop flourishes and the remaining under-18 crowd create a new society and religion.  Cue our adults, Burt and Vicky.  Their coming is foretold by a clairvoyant young girl and Issac, Malachai, and the other cult children prepare for their coming.

Children of the Damned and Children of the Corn are probably the most quintessential creepy children films.  Between Issac's voice and appearance, and Malachai's penchant for violence, there's always something to make you feel just slightly unsettled.  In addition to that, there's no down-time with this film.  It's just scene after scene after scene of something happening or plot development.  I'm not complaining, it's just something that I haven't payed attention to on previous viewings, but it really keeps you engaged with the film.

The only major issue I have with Children of the Corn is that its effects are dated as fuuuuccckkk!  The rotoscoped lightning and claiming of Issac, the sky color change, and let's not forget when Issac is on a cross and it just shoots up and spirals in the air like a child throwing an action figure.  I'm sure they did what they could with what they had, but damn!  Also the unexplained actions of the children ransacking Burt and Vicky's car and then just filling it with corn stalks seems excessive.  We get it!  Your shit is corn!  Calm the fuck down!

Fun fact to end this review on:  While researching this I found out that the kid that played Issac also played Cousin It in the Adams Family films (and MC Hammer video).

I give Children of the Corn 4 rotoscopes out of 5: