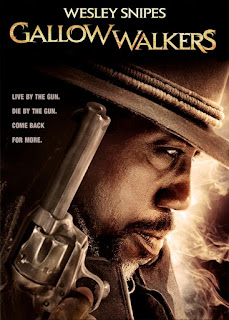 Mother fucking Wesley Snipes!  Fuckin' Blade!  Mother fucking Simon Phoenix!  A man that has vanished from the public eye (except for the one time my friend was his Uber driver).  He's back!  Or at least he was back in 2012 with today's film.  Is my excitement warranted?  Does Snipes live up to my hype?  Does this film do him justice and vice versa?  Ehhhh......

Gallowwalkers (yes, all one word) takes us to the old west where a badass looking Mr. Snipes is hunting down a specific individual all while doing Sub Zero head-rip fatalities and being a rad cowboy.  We come to find that the man he's looking for is a strangely skinless person that steals the flesh from a young man and harasses a cult known as Enoch's Hammer.  His actions are all because he thinks that Mr. Snipes killed his son.  Wesley picks up a sidekick at some point and then everyone meets on the farm where our hero was raised for some final gun shooting and rock throwing.

Okay, real talk, as hyped as I have been sounding with this review, this film isn't that great.  Wesley Snipes looks cool but when he talks it feels lackluster for someone that is meant to be a shoot-first-growl-talk-later type of guy.  As a "presence" though, he kills it.

The plot and character design are what saves Gallowwalkers for me.  If this were just a bunch of jagoffs in cowboy hats shooting each other because of "reasons" then I would've counted this as a total loss.  Instead we have men that steal the skin of other men (and in one case, lizards), carrying around a crucified mummy, all while hunting down Wesley Snipes.  On the other side we have sick dreadlock and grey-in-the-right-places Wesley hunting them down in return and ripping people's heads and spines off to satisfy his own revenge, and counter the curse upon him.

I made this movie sound sick as hell again...

I give Gallowwalkers 3 Simon Phoenix's out of 5: