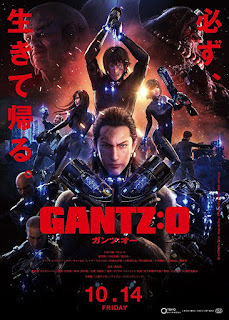 Here's something new to the 30 Days of Plight.  I've covered live action films of manga/anime with the Netflix Deathnote film, I talked about the anime inspired Castlevania series in my Choice Cuts, but now we get a CG film based on a manga/anime.  I just need a legit video game movie to pop up now.  Maybe one of the three Resident Evil animated films... which I own on blu-ray... shut up!  I like them!

Gantz:O is like watching an hour and a half video game cutscene (I'm looking at you Kojima!).  After Kato is stabbed and killed by some psycho in the train station he wakes up in an apartment with four other individuals and a large black orb known as the Gantz.  In this version of Japan some people die only to resurrect as part of a game where they battle real life monsters in order to gain points.  If a player collects 100 points in a round then they are granted a "wish" where they can get a special weapon, bring back a dead teammate, or be set free from the game and never have to play again.  Kato needs to survive, not only for himself but for his younger brother he cares for.

This is my first exposure to anything Gantz.  I knew of it, but never what Gantz's plot was.  After watching this though I definitely want to check out at least the manga.  I was afraid the use of CGI was going to detract from the film.  Luckily the CGI is just lifelike enough that your mind is kind of tricked into thinking it's live action.  This is in opposition to other similar films such as Advent Children.  Keep in mind though that Gantz:O is years later than Advent Children so technology has only improved.  The creature design for Gantz was impressive, with a great collection of creatures inspired by Japanese mythology with parts swapped out like custom action figures.

I will say that certain plot lines get confusing with this, especially when it comes to the very end.  I had to look up interpretations online but this just left me with more questions as this timeline apparently takes place after Kato's second death and he has no recollection of his prior time in the game.  These elements don't detract from the movie though and even the ending part could be read as set-up for a sequel.