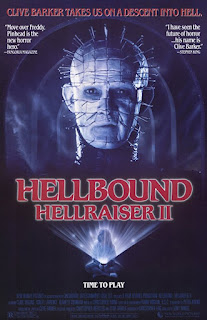 To start, if you've never seen Hellraiser then you might want to click on that and read my review from way back in my first cut.  I glanced at it and it is an epic read compared to how I do these now but it'll fill you in on everything you need to know.  Why?  Because I never realized how much you need to have seen the first Hellraiser to understand all of Hellbound: Hellraiser II.  The first Hellraiser movie we watch quarterly, like it's some sort of solstice celebration.  "Let us celebrate the time of harvest with demons in bondage gear!"  But it's been some time since I've seen numero dos.  So is it time to play?

Hellbound: Hellraiser II takes place shortly after the end of the first Hellraiser (ignoring the very end with Kirsty and her boyfriend trying to burn the Lament Configuration only to have some weird Spawn villain steal it from the fire).  Kirsty wakes up in a hospital where she sticks to her story of her skinless uncle and tramp step-mom (Julia) murdering her dad, a puzzle box that opens the gates of hell, and demons.  It is quickly uncovered that the doctor in charge has had an obsession with the Lament Configuration and the Cenobites.  It comes upon Kirsty to once again deal with Pinhead and his gang, stop the doctor and Julia, and save a young girl named Tiffany.

Despite the fact that Hellraiser II has a ton of spliced-in scenes from the first movie, I tend to prefer this one over the original.  This film takes what little we know about the Cenobites and basically hands us an encyclopedia of expanded knowledge.  We find out there are multiple Lament Configurations, that the Cenobites were all human prior to being changed, how Cenobites can be created (and destroyed), and what their world really is.  It's the kind of lore dump that causes a person like me to pause the film and just try to read and make out everything that's in the scene because it's overflowing with info.

This is an odd statement to make, but this film feels more Clive Barker to me than Hellraiser was.  If you've ever seen Mr. Barker's art then you'll know that he doesn't hold back on sex and sexuality (read as: cocks everywhere).  The concepts of "pleasure" and "pain" have a greater visual representation in this installment.  We see a three way with people moaning all while hooks and chains are pulling at their flesh.  We have covered bodies writhing and moaning before the sheets stain with blood. Then there's Julia, who wields sex as if it were a knife in a mugging.  Just the phallic imagery alone in this film would make Giger froth in anger at all the changes he had to make to his Alien designs.

Hellraiser has become a shadow of what it once was, and that's disappointing.  I know that Mr. Barker stopped having major input after the fourth film and it shows (he had very minor input on the sixth, just FYI).  If nothing else though, we do have these first two films which are great... then three which has a Cenobite that shoots CD's... just fucking shoots CD's.  His name, CD.  Fuck that dude.  But four makes up for it with Angelique.

I give Hellbound: Hellraiser II 4 latex ladies out of 5: