If it weren't for the Troma film Terror Firmer then I probably wouldn't have ever made this website.  I know that's a weird pull, but stick with me here.  In college, it was the first Troma film I had access to, but more so than that it was the first time I was able to really recognize independent film.  Previously my associations with independent film were neutral.  It didn't feel accessible for just anyone to make a film, until I saw the absurdity that was Troma.

So what does this have to do with Douglas A. Ewen?  He is an independent writer and director making his own film dream come true.  His first project, Harmonized Combustion, is in the process of wrapping up and running an IndieGoGo to film its final scene.  What is Harmonized Combustion?  Glad you asked: 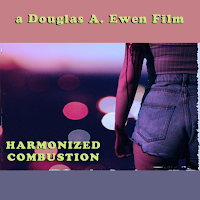 "In this devilish romance tale of revenge, glamorous 80’s dark synth and bandmate battles. Rae, our cursed beauty, finds herself hopelessly in love with the one person who she can never truly be with, Parker. The frontman to a rising local band and the love of all who hears him play. Parker hosts one last show in the memory of his fallen bandmate, Charlie. As the crowd begins to pile in to hear the melody of memory they're none the wiser that this is the one concert that will literally blow their minds."

If you're interested in helping with Harmonized Combustion, the IndieGoGo campaign will be running until May 14th.  For only $10 Canadian (that's $7.79 US!) you can get your name in the credits as well as have access to Harmonized Combustion before it hits the festival circuit!  There are other options, also with some really great perks including Associate and Executive Producer credits!  Impress your friends or random people that think they're cooler than you with a possible IMDB credit!  Make business cards with that!  Seem super cool!

We want to thank Douglas again for doing this interview and wish him luck with the last of Harmonized Combustion!
Posted by J. Cimba at 2:00 AM