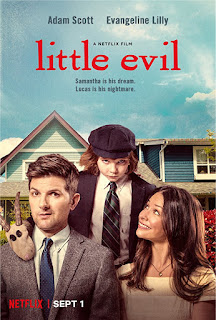 This is the third fuckin' horror movie I'm doing on here that has Adam Scott in it! Piranha, Krampus, and now the Netflix original, Little Evil!  Is he becoming the new Christopher Walken, popping up all over the place because he doesn't want to get bored?  I'm not complaining.  He became a boy mayor and blew the town's money on a giant winter sports complex named Ice Town!  And if you don't understand that then go watch Parks and Rec you uncouth fart!

Little Evil is a horror comedy based around the premise of The Omen... or maybe just an AC/DC album since the kid looks more like Angus Young than Damien.  Gary marries the woman of his dreams without having ever spent time with her son Lucas.  Lucas is literally the child of the devil, conceived through some strange cult ritual.  Gary just wants to be a good step-dad for his step-son, Lucas wants to bring about the apocalypse, the mother is oblivious.  It's a step-dad support group vs. a doomsday cult while Gary attempts to become the father he never had.

Netflix hasn't really been pumping out good content when it comes to their original horror films (ex: I Am the Pretty Thing That Lives In the House) but they do a much better job when it's a cross-up such as this.  It's like an America swing at making a film in the vein of Shaun of the Dead.  We get nods to The Shining, Poltergeist, and some Ghostbusters humor thrown in.  We're also treated to one of the best uses of Rush's "Tom Sawyer" for a device reveal.  I had a good time watching Little Evil.  It's one of those films where you could have some friends over, order some food, and make a Friday night of it.

I give Little Evil 3 copies of High Voltage out of 5: