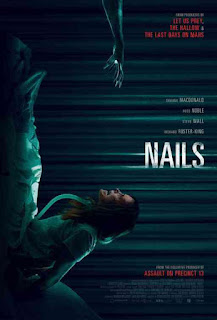 I've recently been trying to get back into shape.  I was never ripped but I played ice hockey from the age of 5 up until I moved to the deep South... where ice exists only rarely and when it does the entire city shuts down.  Why am I sharing this info with you?  Because if I take nothing else away from this film, it's that you can try to be as healthy as you want but you can still get wrecked as fuck by something beyond your control.

Dana is a track coach going through her usual yoga/morning run routine when she is hit by a car.  The driver immediately leaves the scene and only through sheer luck does Dana end up in the local hospital.  When Dana comes to she has the feeling that she's being watched by an unseen figure at night time.  During her recover she finds that the hospital had an orderly that acted as an "angel of mercy" to five sick children before he was found out.  His nickname was Nails, due to his habit of keeping fingernail clippings from the children in envelopes.

This is another film that would've worked out much better if it were a thirty-minute short.  There's a sub plot of Dana's husband having an affair that serves no real purpose aside from the ghost showing Dana a weird video of it.  We also get a large amount of time spent showing that the hospital is poor and practically in disrepair.  It's filler that did nothing to further the main plot and only padded the movie out.

The final act of this film jumps the rails completely.  In fact, it doesn't just jump the rails, it jumps to another rail, grinds that into a combo and finds a secret tape hidden there.  We become established with why Nails wants to kill Dana but now he's just killing anyone and everyone in the hospital.  It's one of those moments where you ask yourself why he didn't just do that shit in the first place.  You're a ghost with ghost powers, use them!  Ghost it up!

I give Nails 2 weed leaf nails out of 5: